With multiple SPACs and a drop in price enabling mass adoption: Light Detection and Ranging Technologies, or LiDAR, are favored by industries pursuing automation. Lidar gives devices like cars, robots, and drones "eyes" with sensors to enable computer vision.

If you're new to LiDAR, don't sweat it - at the pace of this rapidly developing technology, there is constantly further information and potential for innovation to digest. For an introduction to LiDAR technology, I recommend reading my first newsletter for an in-depth look at the landscape of this emerging technology: LiDAR 101 Weekly Panel Takeaways

The past week on LiDAR 101, we had the honor of welcoming Tom Grey, Product Marketing Manager at Ouster, to the "Clubhouse stage" to add to the conversation. The appearance comes at an exciting time for Ouster, who recently joined mobility tech's SPAC craze - and officially began trading on the Nasdaq under the ticker (OUST) on Friday, March 12th, 2021.

Ouster invented its digital LiDAR in 2015 and is a leading manufacturer of high-resolution digital lidar sensors used throughout the industrial automation, smart infrastructure, robotics, and automotive industries. Ouster's sensors are reliable, compact, affordable, and highly customizable, laying the foundation for digital lidar ubiquity across endless applications and industries. Already hundreds of customers have incorporated Ouster lidar sensors in current products or those in development for imminent commercial release. For more information, visit www.ouster.com, or connect with us on Twitter or LinkedIn.

To first predict how LiDAR will be widely adopted, we must understand the framework of how technology is introduced and ultimately adopted as the "next wave" versus left behind. I'm lending expertise from the "Diffusion of Innovations," now in its 5th edition since first published by Everett Rogers in 1962. Rogers theorizes how, why, and at what rate new ideas and technology spread through cultures.

The five factors outlined by Rogers include relative advantage, compatibility, complexity, trialability, observability. Here is the meaning behind each tenet of this framework and how I believe LiDAR fits in when assessing its potential for mass adoption.

For example, is LiDAR technology improving rapidly over previous LiDAR sensors and other remote sensing technologies.

I still remember the first time I visited Philadelphia in 2016 when a friend told me the Comcast Tower was designed to be shaped like a giant flash drive. I'm not sure the truth behind this, but I remember incredulously asking my friend to explain. In my mind, USB flash drives were already outdated as a recent college graduate with a dependency on Google Docs/ cloud-based solutions.

A case in point is that some technologies are developing so rapidly, mass adoption is difficult to pinpoint for fear that the technology will outpace itself with a better solution by the time it is integrated for widespread use. One example would be flash drives, 3D printing, or computer processing for example. However, the technology needs to be better than previous solutions to be seen as valuable and worth adopting on a massive scale.

The data derived from LiDAR sensors are exceptionally flexible for the end-user and remain the only technology of its kind to produce 3-d and even 4-d data points. I believe LiDAR is going through a similar transformation that radar did last century, widely adopted for its information sensing capabilities following WW2.

2. Compatibility – The level of compatibility that an innovation has to be assimilated for usability.

In short, how hard is it to integrate LiDAR sensors for application? What expertise does integration require?

3. Complexity – If the innovation is too challenging to use, it's more difficult to achieve mass adoption.

The caveat here is that LiDAR has become popular thanks to the rich and often complex data sensors provide. Ultimately, making LiDAR data more deliverable for automation is in sensor technologies' best interests. The main consensus is that LiDAR is complex, but so are the problems LiDAR is used to solve, such as achieving full automation or activating smarter cities.

Complexity, in my opinion, is LiDAR's most significant barrier to mass adoption. In turn, there is a fragmented market around processing and making the data it creates more usable. My work at Metrolla is centered around solving barriers to acquiring and using LiDAR data for automation in near-real-time, remotely.

4. Trialability – How easily an innovation may be experimented with as it is being adopted.

Formerly, the cost associated with LiDAR is what has stopped many industries (and famously Tesla) in the past from adopting LiDAR. With the price of sensors dropping to 5 - 10% of previous sensor costs in recent years, price no longer remains a barrier to using LiDAR.

5. Observability – The extent that an innovation is visible to others.

An innovation that is more visible and has more attention will drive more users towards its benefit, paving the way for mass adoption. With Tesla's contention against LiDAR, multiple SPAC IPOs, and many cities and infrastructure adopting LiDAR, the technology has become a bit of a buzzword to achieve Observability at scale the past few years. 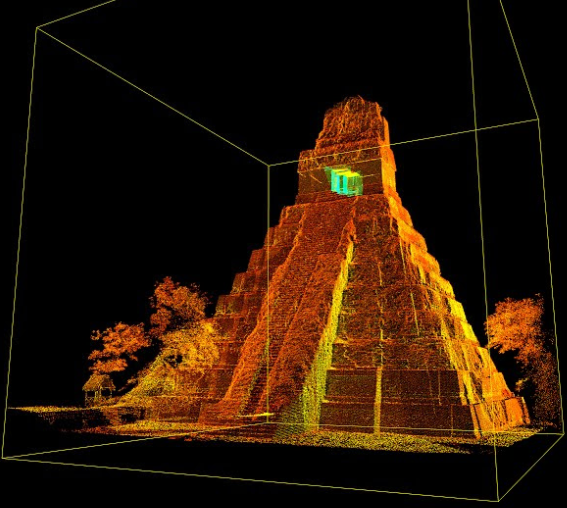 This past week, the panel was posed a question on the potential for LiDAR and how it can potentially influence UNESCO World Heritage Sites.

A 3-D point cloud scan of Tikal Temple I

While Lidar has been used in mapping and archaeology, its use cases for UNESCO are far-reaching. A non-fiction book-turned documentary called The Lost City of the Monkey God: A True Story outlines an expedition to Honduras that located an unexplored city and civilizations using LiDAR sensors. Similarly, National Geographic has reported how LiDAR has helped unearth hidden gems from the buildings and artifacts of Mesoamerica's cultures that have been hidden by lush rainforest vegetation.

While LiDAR has not *yet* been used to find the lost city of Atlantis, LiDAR has been used to map the UNESCO World Heritage Site of Halin in Myanmar. The project involved drones' deployment in gathering data necessary to prepare accurate maps and digital elevation models.

The goal of the project was to assess current features while potentially locating new features from massive walls, dams, and digging canals, many of which are still visible in the landscape. The data also enabled the site to check if modern constructions or farming have caused any potential threats to the site. Other World Heritage Sites that have looked to LiDAR to promote preservation include Ananda Ok Kyaung temple in Thailand. The building focuses on a UNESCO pilot project on conserving the best monuments impacted by the 2016 earthquake.

In the future, LiDAR can be used to help monitor potential threats at UNESCO World Heritage Sites, as well as benchmark potential for additional funding to help conservation efforts.

Continue the Conversation: LiDAR 101 on Clubhouse

If you want to continue the live conversation on how LIDAR technology is driving automation, join the LiDAR Technology Club (see image below).

For questions or feedback contact the author Alexandra Reynolds, CMO/Co-founder at Metrolla at [email protected]

Email [email protected] or connect with us on LinkedIn or Twitter for more information.